How To Make Chamomile Hot Chocolate 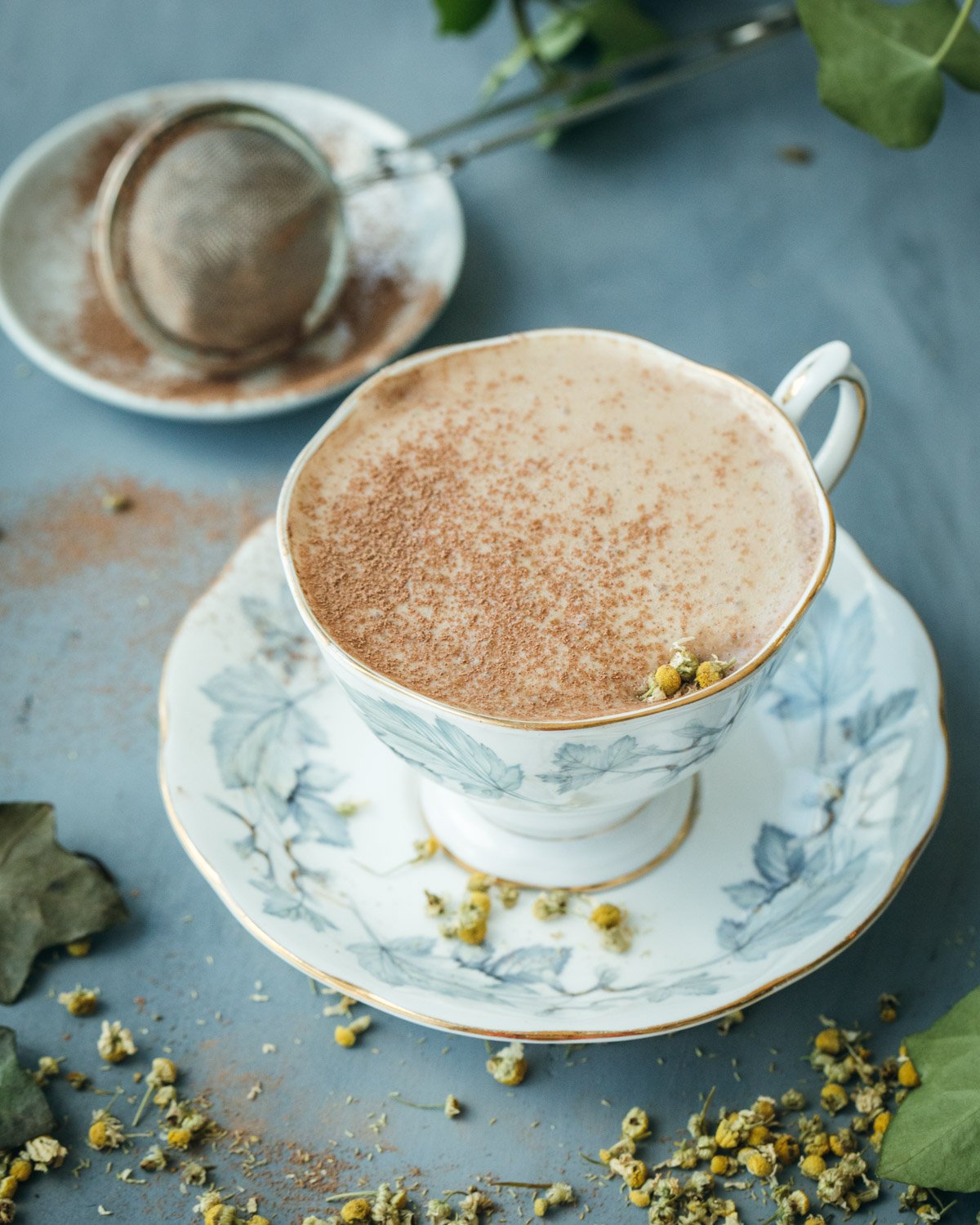 If you’re having an issues sleeping, a cozy cup of chamomile hot chocolate is the perfect remedy for sleep or general anxiety. Dessert in a teacup before bed? Yes please!!! This gentle caffeine free herb combined with comforting cocao is a delightful treat.

What Does Chamomile Tea Do?

Chamomile contains apigenin- an antioxidant that binds certain receptors in your brain that promotes sleepiness and increases relaxation. This miniature looking daisy is a subtle aid for helping you sleep. Contrary to popular belief, it’s not a mini daisy, but in the same family as daisies, Asteraceae.

I can’t help but feel restless most week nights. After an epic episode of Marvelous Mrs. Maisel and obsessing over all of her cute clothes and matching bright colored hats, and the list of things I want to get done tomorrow, the only herb that helps me calm my mind in the most gentle way is chamomile. Chamomile – the flower of equilibrium. A symbol of energy and patience in adversity, traditionally used in love potions and weddings. It’s also a lovely addition to your tea party as a non caffeinated option! 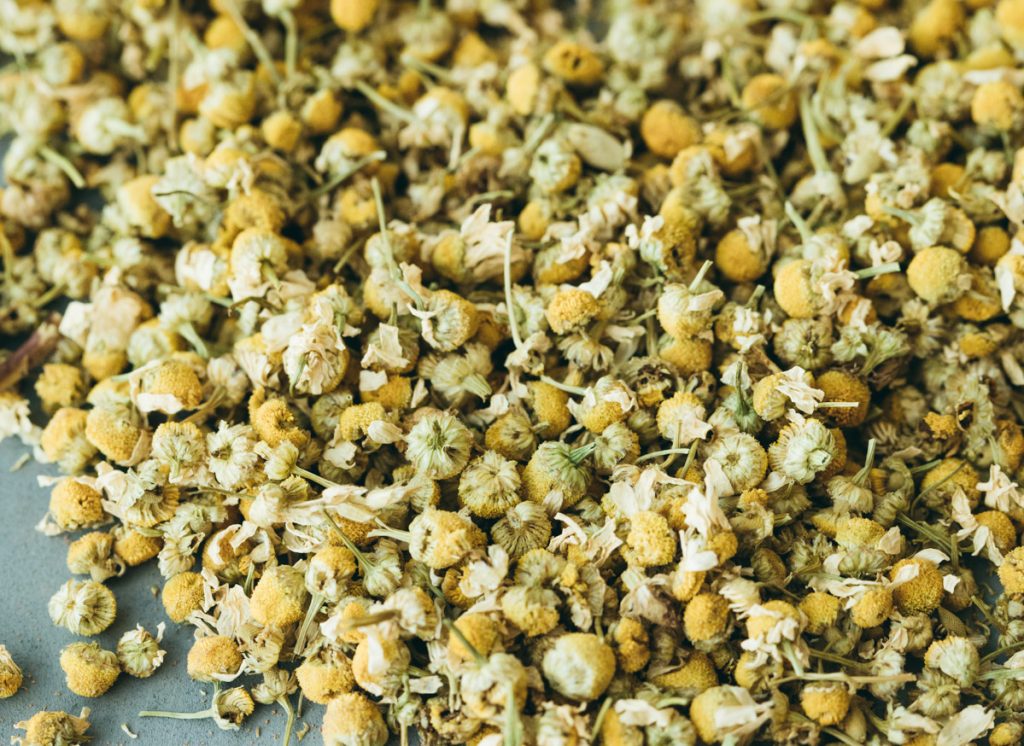 Hot chocolate is a known soporific meaning it induces drowsiness. The amount of cocoa powder in this recipe is so minimal you won’t feel the effect of any caffeine. Sipping this bedtime tonic underneath a thickly woven blanket, book in hand, cat on lap, equals instant coziness and as sweet lulling into slumber.

I ordered the chamomile from Mountain Rose Herbs, where I order all my herbs because I know they are organically grown. The 8 ounce bag comes with dried chamomile buds that you can use in a tea strainer for tea, or try my shortbread chamomile orange cookies.  If you have orange peel powder, or some leftover orange peel, add it into the saucepan for added flavor. It adds an element of tang and more vitamin C can’t hurt right? I love the cocoa from SRSLY Chocolate based out of Taylor, Texas. 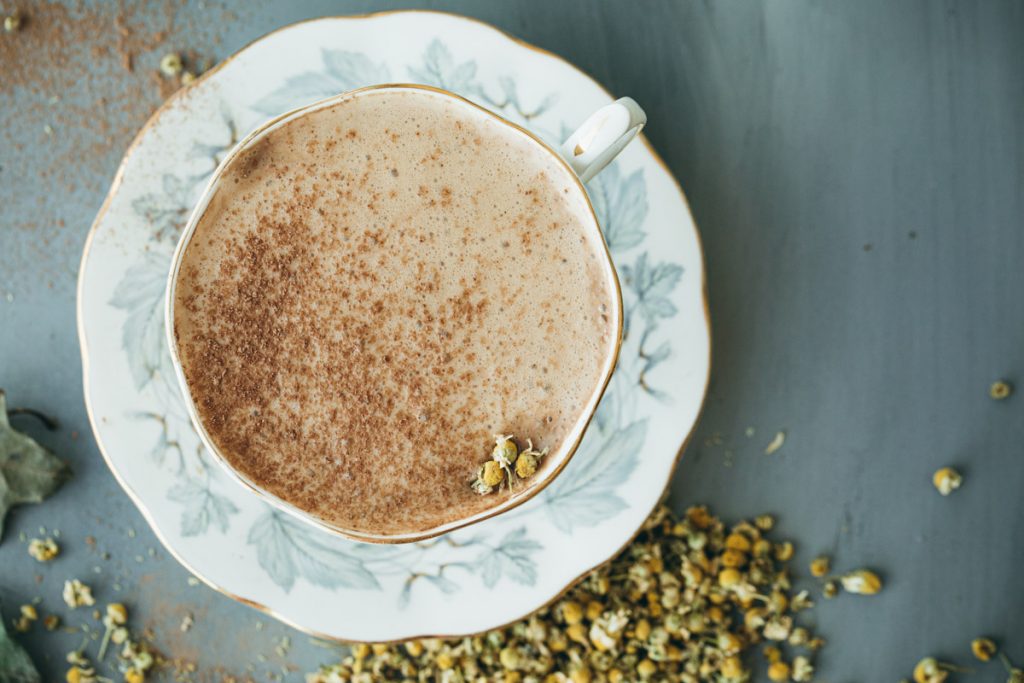 Chamomile is a daisy-like flower from the plant family asteraceae, which also includes flowers such as those golden hued  sunflowers and marigold. It promotes relaxation the more you drink it, increases you heart’s health, prevents colds, and it’s great for your hair and skin.

Egyptians revered chamomile for it’s healing virtues and dedicated it to the sun God, Ra since they considered it an effective remedy for a fever. Years later, it was used to cure hysteria, insomnia, nightmares, and convulsions. The most fun fact is not only does chamomile benefit people, but it has been used to cure sick plants. Chamomile can be added to a vase of droopy flowers and literally revive them!!! Don’t you want to be best friends with this dainty little flower?

This recipe makes two cups of chamomile hot chocoalte. One for you and your sweetheart. 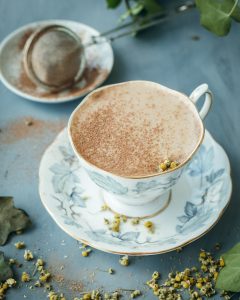 Gently fall asleep with this before bedtime tonic!

Add all ingredients to a sauce pan and slowly bring to a boil.

Take off the heat and let steep from ten minutes.

Take out the tea bags and add any additional sweetener like honey or maple syrup.

If you have a milk frother, pour one cup at a time into it to make it frothier and more fun to drink. I use nespresso aerocinno 4 on the fourth setting for ultimate velvet foam!