The Herb That Helps You Sleep 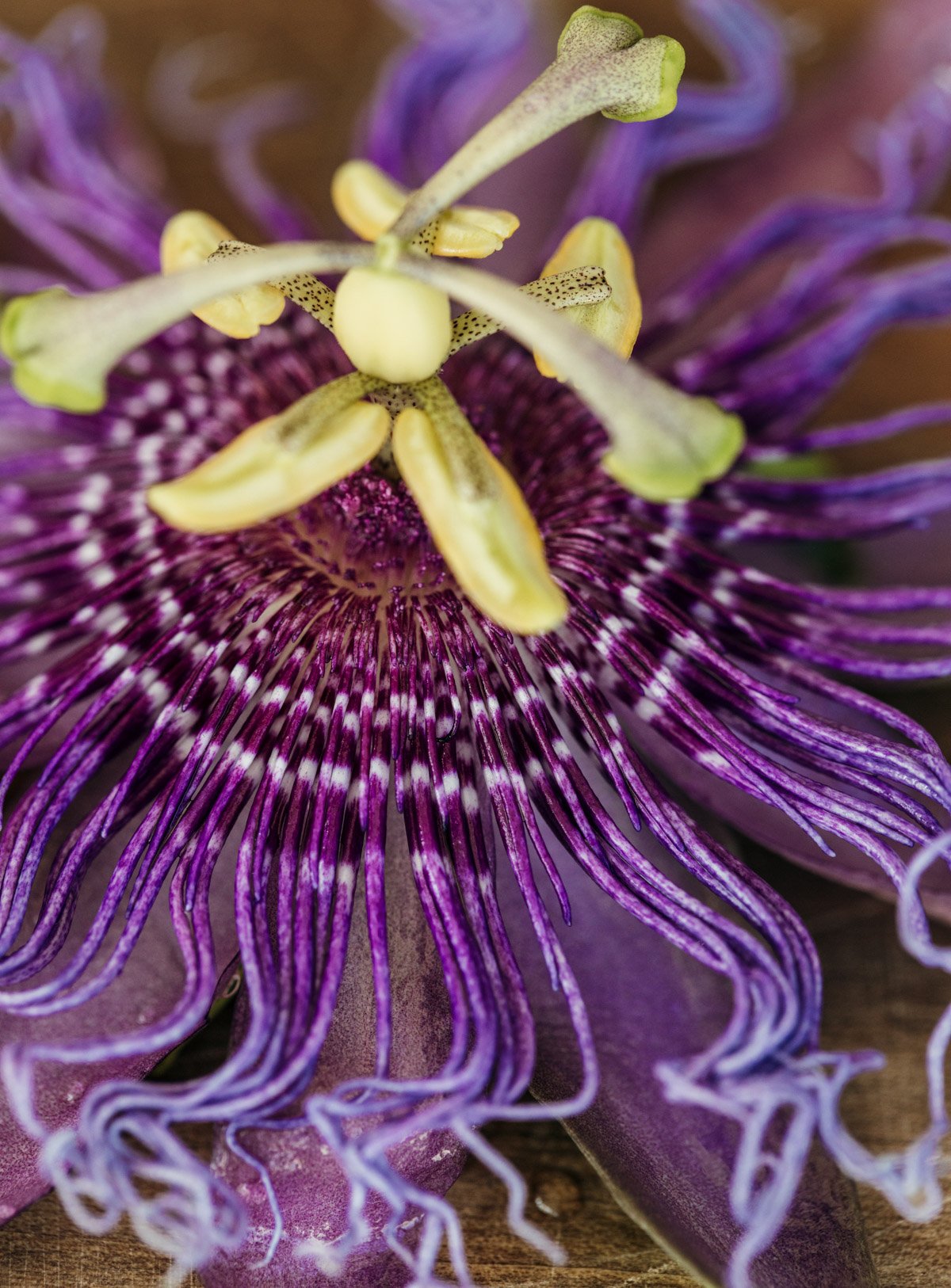 Are you having trouble sleeping? Passionflower is a gentle, anti-anxiety and mildly sedative herb that can even be used to induce a good night’s sleep, hence the name, the herb that helps you sleep! These beautiful purple flowers are the perfect addition to your bedtime routine. You’ll find everything about the history and what you need to make a tincture to help you sleep the 8 hours you’re looking for!

What's in a Name?

Passiflora caerulea or Passiflora incarnata… passi- flor- a… light of my life, my sleepy bedtime tonic, the curly, purple striped tendrils all perfectly lined up. An other worldly- looking flower, certainly sent straight from the heavens. I harvest these delicious flowers when crisp autumn air rolls in from the north. The tendrils of curly vines wrap thickly around a fence, that it no longer exists. I unwound the swirls of tangled vines, dodging bumble bees after the sweet nectar, and admired this glorious treasure. Passiflora caerulea or Passion flower incarnata, also known as – Passion flower. 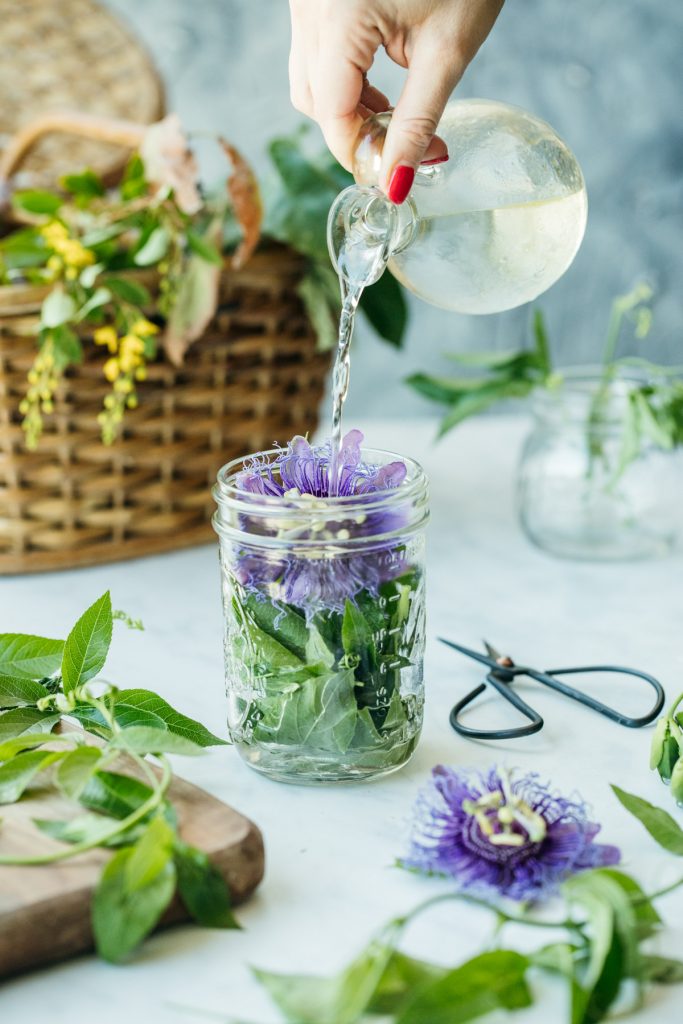 Is passionflower an aphrodisiac?

It must be an aphrodisiac! I mean look at it! It ignites passion just staring at its electrifying appearance. But contrary to popular belief, it is a sedative, and actually promotes sleep. You can bottle up this flower and its leaves into a tincture to lull you to sleep. It’s also an antidote to headaches and general nervous tension.

Tinctures and why to make them

A tincture is an ethanol extraction, usually of a single herb, for medicinal use. Ethanol typically being alcohol (drinkable alcohol, not rubbing!) Why would you want to make them? They are easy to transport, and they have a very long shelf life, easy to administer (even for kids!), and very useful in certain circumstances. I travel with my tinctures, and I can’t tell you how many times, I have reached into my bag for my passion flower tincture when I am jet lagged, or feel a bit anxious, and would like to be gently lulled to sleep by this magical flower. 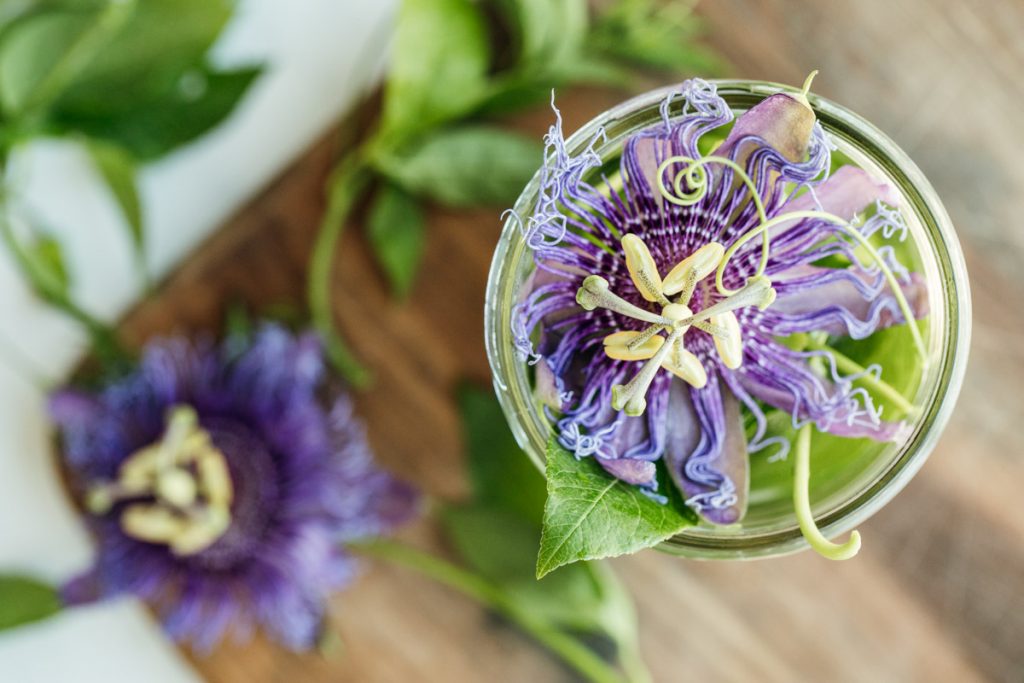 The goal of a tincture is to extract plant at the height of its vitality. When a plant is vibrant and ready to be harvested, you will want to bottle it and store it away for winter use! The best way to extract the constituents of a plant is through a high proof grain alcohol like everclear. Everclear is 190 proof, meaning it’s 90 percent alcohol (divide by 2 to equal 90%)  I buy mine at any liquor store for about 15 dollars a bottle.

Everclear will best extract alkaloids, glycosides, organic acids, essential oils, chlorophyll, acrid and bitter constituents. If there is more water in the alcohol, it won’t pull out as much constituents and alkaloids. Does that make sense? Good! Let’s keep going. We are almost to the recipe!!! But because I’m a plant nerd, I want to share some history and folklore about passionflower first. 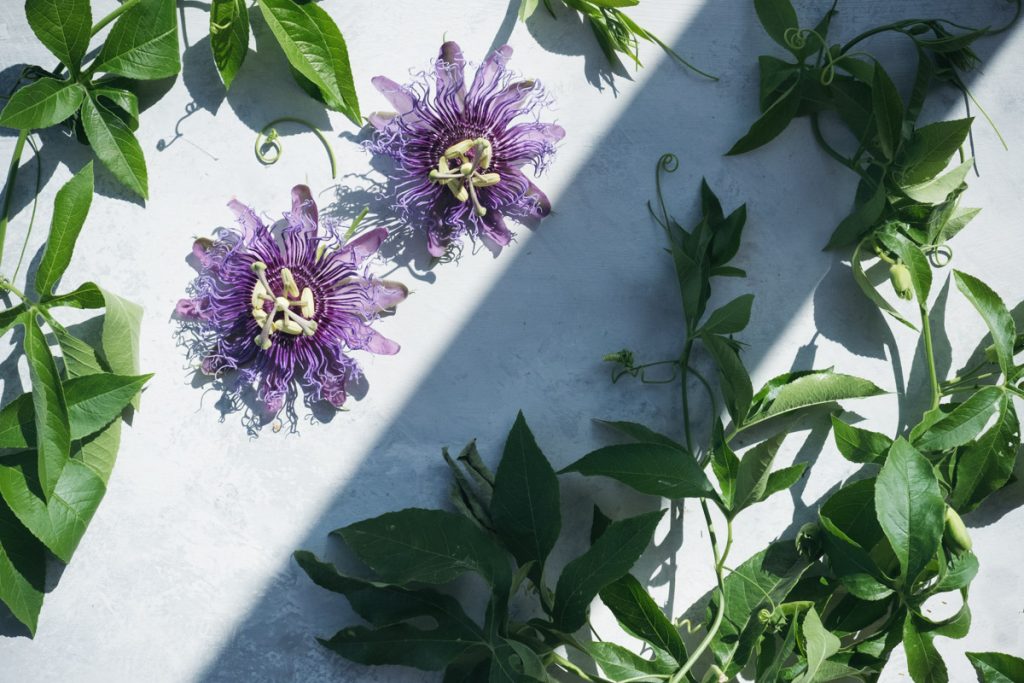 There are a few different species of passionflower. The two that I have used medicinally are Passiflora incarnata and Passiflora caerulea, commonly growing along fence lines in shaded and dry areas, and flowering early to late summer. The association to Christ and the passionflower originates in South America when Spanish explorers viewed the flower as a symbol of the crucifixion. Five sepals and five petals represent the ten apostles, the five stamens represented Christ’s five wounds, the corona for the crown of thorns, and the tendrils symbolized the cords they used to whip him.

The Spanish interpreted the finding of the passionflower as a sign in their efforts to convert the natives to Christianity. It is used medicinally more so in Europe, having a narcotic effect with its sedative properties for insomnia issues, restlessness, general nervousness, muscle spasms, and even hyper-activity in children. The flower produces a fruit called granadilla or water lemon, that is long yellow to orange skin, a sweet and succulent fruit with seeds, but no medicinal properties.

Folk or simpler’s method is typically used for fresh plants and does not require a scale.

The Herb That Helps You Sleep 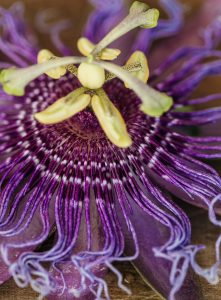 Passionflower tincture that you can take before bedtime to lull you to sleep. You can also drink passionflower as a tea if you need it sooner than four weeks. Some other recipes recommend equal parts passionflower, skull cap, wood betony, valerian and half parts licorice and ginger for nervousness and insomnia.

Make sure your jar is rinsed with soap and water and completely dried inside.

With scissors or a knife, cut the leaves roughly, pull out any dead or wilted looking leaves that you wouldn’t want to eat.

Place a square of wax paper on top, and then cover with the lid.

Turn jar upside down a few times. Let sit in a cool dark place away from the sun for four weeks. Shake every few days, reminding yourself of the intention you set when you made it.

After four weeks, strain the plant material through muslin. Squeeze out as much moisture as you can. Some people use a potato ricer, however, I just press out as much as I can with my hands.

Use a funnel to pour into an amber bottle, and re-label that bottle.

A new game where William builds an elaborate tower

Where are all the Cinderella pumpkins?!!! Or fairy

How to make an easy fall centerpiece with some pin

Under 1 minute cheese board! Here are my favorite

Fluffy scrambled eggs with a secret ingredient- or